A pancake throw is a type of trick throw invented by Sergei Ignatov where a ring rotates in the air in a visible way, with the top rotating toward the juggler like a club. 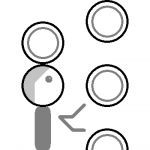