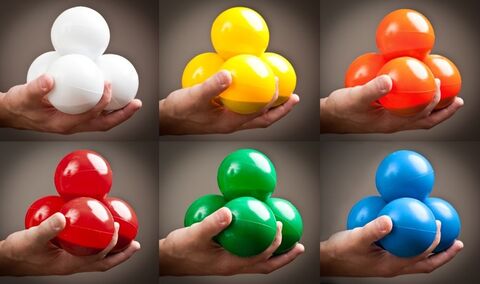 The NORWIK juggling ball is a type of Russian style ball created by Norwegian juggler Kristian Wanvik in 2011. A NORWIK ball is constructed from a spherical and hollow plastic shell, and filled to about 20% of its total volume with fine-grained sand. The balls are offered in two different sizes:

In 2014, NORWIK introduced a new weighted ball named the Viking Norwik, which is offered in 75mm and 5 different weights:

The standard size is by far the most popular model. NORWIKs are offered in 5 vibrant colors (yellow, orange, red, green, and blue) as well as white.

The NORWIK juggling balls have gained popularity since their release in late 2011, and are used by a number of jugglers worldwide. The NORWIK balls' biggest market is currently Scandinavia and northern Europe.

Some jugglers that use NORWIKs: