Gena Cristiani (born Gena Shvartsman on March 2, 1983), is a fifth-generation Russian circus performer.[1] Her father, Eugene Shvartsman, taught her to juggle when she was six, and she moved to the United States in 1991.[2] She is married to Mateo Cristiani, another circus performer.[3]

In 2004, Gena attended the first WJF convention, where she won the Women's Division Club juggling competition,[4] and placed second to Vova Galchenko in the 3 Club 360s competition.[5] 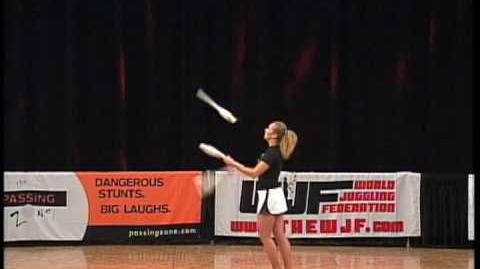 Retrieved from "https://juggle.fandom.com/wiki/Gena_Shvartsman_Cristiani?oldid=22193"
Community content is available under CC-BY-SA unless otherwise noted.