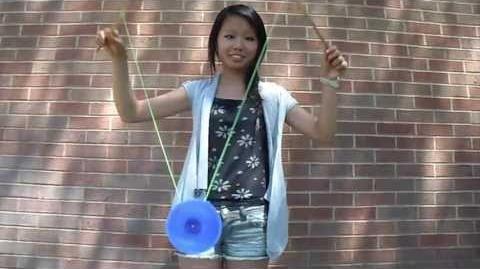 A diabolo is a prop consisting of a "spool" or "two-headed top" that is manipulated using a string attached to two sticks, which are held in the hands.

The modern diabolo was developed and popularized by the French engineer Gustave Phillippart and the English athlete C. B. Fry in the early 20th century. An earlier form of this prop, the Chinese yo-yo, has existed at least since the 17th century.

To manipulate a diabolo on a string, you need to keep it balanced by spinning it. As long as the diabolo is spinning fast enough, it will stay balanced on the string. The simplest way to increase the diabolo's speed of rotation is by repeatedly lifting one of the handsticks while providing slack with the other, making the diabolo roll across the string.

The IJA has had a 1 diabolo performance competition as part of the Individual Prop competitions since 2004. The first winner of that competition was Ryo Yabe.

Two or more diabolos can be juggled on a single string, usually in a circular pattern. There are two kinds of basic patterns for juggling multiple diabolos: High patterns, where the diabolos are individually caught on the string and then thrown high, and low patterns (called shuffles), where there can be more than one diabolo on the string at once.

The unofficial world record for 2 diabolos low (video sped up too much to verify) is 1 hour by Jannis Kaske.

Other people who have done 2 diabolos low for over 10 minutes:

Other people who have done 3 diabolos for over a minute:

Other people who have done 4 diabolos for over 100 catches:

Tricks that have been done with 4 diabolos include:

Other people who have juggled 5 diabolos high:

Other people who have juggled 5 diabolos low:

Tricks that have been done with 5 diabolos include:

(Note: For a catch to be counted in diabolo juggling, the diabolo may be thrown either from the string or from the diaboloist's hand, but it must be caught with the string.)